Germany’s democracy is currently facing immense social difficulties. The displacement of low-income groups out of our political communities fosters a vicious cycle of unequal participation and deficient representation of interests. This leads to the alienation of certain groups in our society and a great loss of democratic potential. This cycle further leads to and begins with the apolitical socialisation of teenagers from a disadvantaged social background, minimising their opportunities for participation. 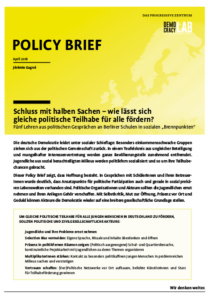 Jérmémie Gagné, Policy Fellow at Das Progressive Zentrum, sought the dialogue with teenagers from such backgrounds. His aim was to discover what these youth think about politics and what they expect from it. In cooperation with the organisation “Teach First Germany” he was able to discuss these issues with students from Berlin schools in socially troubled areas. He furthermore spoke with the organisation’s fellows about their work and their experiences with the students.

In conversations the students stated a clear interest in politics also beyond their direct surroundings. They furthermore expressed the importance of good politics for a society. However, most of them regarded their room for manoeuvre and agency as very limited, seeing politics as a sphere dominated by politicians and powerful people who pay limited attention to the students’ direct needs. They claim that factual discussions about politics are not possible in their direct social surroundings. The expressed desire of the students was to be heard and to be taken seriously by those in charge.

As a result of these discussions Gagné formulated five main lessons and recommendations.

The whole Policy Brief is in German and can be read here.

Special thanks to the organisation “Teach First Germany”, which facilitated the dialogue with the Berlin schools.