Conference Report: Innocracy 2018 | The Next Democracy 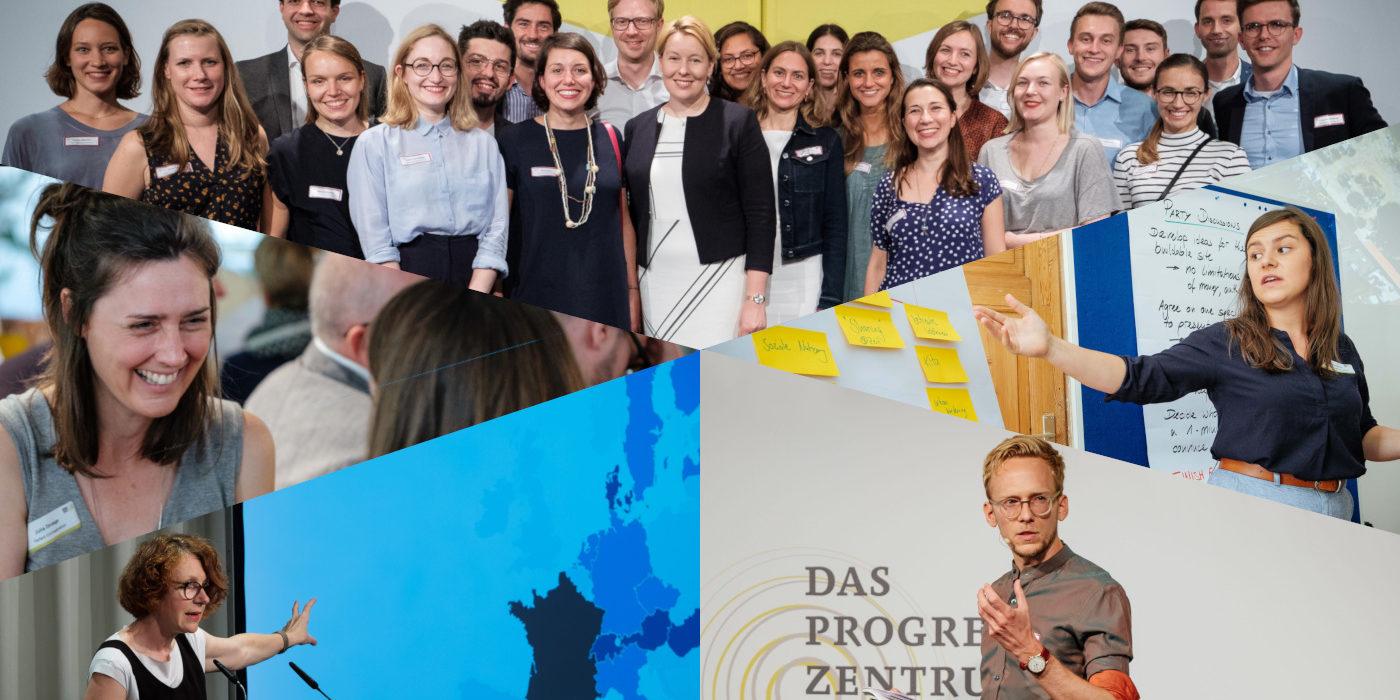 After a first successful conference in November 2017, the Democracy Lab of Das Progressive Zentrum organised its second Innocracy Conference entitled “The Next Democracy: Transforming Paradigms, Institutions and the Market. In four thematic clusters – Digital Democracy, Sustainable Democracy, Community and Belonging, as well as Systemic Reform – this year’s conference brought together over 180 participants from Germany, France, Belgium, the UK, Italy, Sweden, the Netherlands and Poland. The conference offered speakers and participants a platform to debate, inspire and co-create in innovative workshop formats. The day was closed with the keynote speech given by Federal Minister of Family Affairs, Senior Citizens, Women, and Youth Franziska Giffey.

All speakers and session hosts were invited to attend a Speaker’s Dinner the evening before the common conference, where they discussed how to build transformative alliances. Ana Babovic, Executive Director of the global Leading Change Network, gave an input on the topic, and Kaija Landsberg, Managing Director of the Hertie Foundation, gave a response, before all participants started a broader discussion and got to know each other before the conference the next day.

Why do we need “the next democracy” – and how can we build it?

How can we escape the “exploitation game” between the market, society, and the ecosystem we are currently caught in? How can we achieve radical systemic reform by democratic means, go beyond the current democratic system, and create a new sense of democratic purpose within society? “Humble megalomania” was the answer proposed by the Strategic Lead of the Democracy Lab, Hanno Burmester, who raised the transformative challenges in his welcome speech. He based his ideas on the last Discussion Paper written within the Democracy Lab: “Beyond (this) democracy” – Seven sketches towards a new democratic purpose.”

After the first input and a short common session where participants were asked to reflect on the current turbulent times and upcoming transformative processes in society, the various sessions started. While the main stage featured Inspire Talks and Debating formats, the other sessions were organised as Co-Create Workshops. In addition, a Marketplace of Ideas on the ground floor allowed partner organisations invited to the conference framework to present themselves. It featured organisations such as Bundesnetzwerk Bürgerschaftliches Engagement, Betterplace Lab, the European Democracy Lab, The Innovation in Politics Institute, Liquid Democracy, Die Offene Gesellschaft and Schwarzkopf-Stiftung Junges Europa.

How can politics and civil society achieve transformative change?

During the Conference, a number of topics were discussed. Very prominently featured was the question of how to strengthen citizen participation and democratic institutions, for example through citizens’ assemblies and consultative mechanisms. Political scientist Ulrike Guérot presented her concept of a “European Republic”, advocating for a stronger European citizenship that could solve the EU’s democratic deficit. During a Young Leaders Panel, representatives of the Social Democrats, Greens and Liberals also discussed the future of democracy from a younger perspective.

Overcoming social division and strengthening civil society were also important topics during the day. Strategies to break our (online and offline) bubbles, integrate unheard parts of our society, and embrace diversity as a resource for sustainable societal transformation were some of the topics discussed.

Whilst digitalisation is often depicted as a threat to democracy, digital developments are also an innovative resource that can enhance our democracies. This was shown through various projects,  for instance with Eurosocdigital’s idea to improve the resilience of urban coastal areas through big data. Digital tools can also help us understand why people vote for populists. This is what Das Progressive Zentrum in cooperation with Liegey Muller Pons found out in a study about the “political left behinds”.

Some of the conference formats reflected on personal development and its impact on social development. What personal values drive system transformation? How can countries contribute to the inner development of their own citizens to overcome transformative times peacefully? The outcomes of the various workshops were reflected in break-out groups,  allowing to combine and reflect the learnings of the day with the other participants

The Family Minister’s wish: A democracy that works for everyone

The conference ended with a keynote speech by Family Minister Franziska Giffey entitled “Is politics changing? We change politics!” Reflecting on the positive impact of the topics discussed during the conference, Minister Giffey brought along an important message: Politics needs to be framed in a manner accessible to everybody so that a sense of trust and security can be reinstated into society. It needs to prioritise education and disrupt fixed power structures.

There are not only people who attack our democracy. There are also people who defend it. With the programme “Demokratie leben!” (Living Democracy), the federal government is supporting those who support democracy and defend it against extremism.

Shortly after the Conference, Summer Night of Das Progressive Zentrum started. This event took place at the same location and saw the Chairman of the Green Party, Robert Habeck, and the Minister for Family Affairs, Senior Citizens, Women and Youth, Franziska Giffey, discuss the future of progressive forces in Germany and Europe. After the discussion, the participants and speakers of the Innocracy Conference were invited to stay to meet the guests of the Summer Night and enjoy the end an inspiring day with food and drinks, whilst discussing the future of democracy.

We would like to thank all participants for making this day a memorable one full of inspiring talks and exciting new connections. We would also like to particularly thank all session hosts which made their way to Berlin for this special occasion, and hope that lasting relationships and connections will arise from this conference. Above all, we would like to thank our partners the Hertie Foundation, Alfred Herrhausen Gesellschaft, Guerilla Foundation as well as Tagesspiegel for the media partnership.